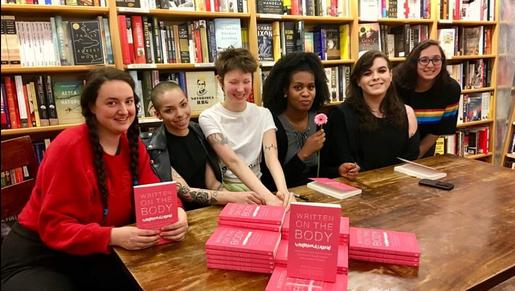 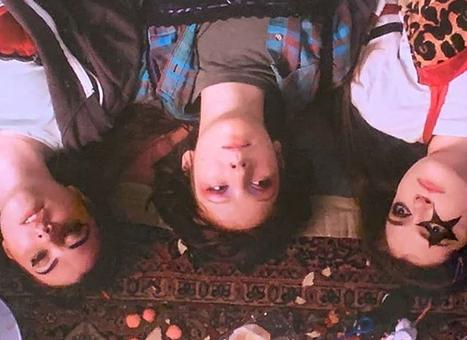 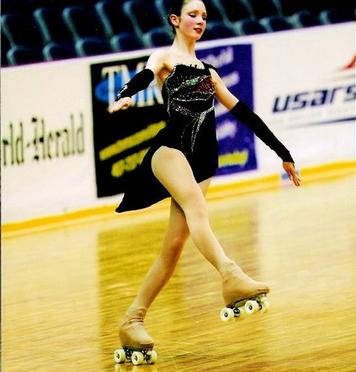 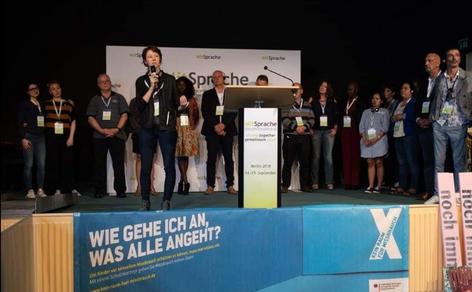 HI! My work has ranged from indie short films to a national ad featured in Times Square. I like to be challenged! Explosive feelings! Intimate, messy, complex queer content! Lately, I've been especially interested in storytelling dealing with addiction, mental health, binaries, and navigating abusive histories and relationships. I will be tackling many of these things in my latest project, They/Them/Us, which premiered at the Chinese Theater in Hollywood and was just released on streaming. You can see a lil preview with me and two my screen siblings heads :)

Never in a million years did I think "public speaking" would be a thing for me! But here we are. A whole lil section on my website.

​I got my start on this when my Contact Improv professor wrote a book about dancer Isadora Duncan and asked me to read a piece by Gertrude Stein. When my first anthology came out in 2012, I began developing a storytelling workshop. This eventually became a tour of workshops to domestic violence shelters, transition homes, rehab centers, and universities through Canada and the USA's Midwest. That became another tour through the UK, then another focused on sexual abuse survivors, at event at MitSprache, the world's largest conference of childhood sexual abuse survivors in all contexts. Now, with representation by Creativewell, I travel regularly to colleges, universities, and conferences around the United States and continue to hold workshops, panels, and artist talks virtually. Additionally, I am currently training in circle facilitation with restorative justice group, Hidden Water.

You can see below for more information on panels, talks, and workshops available through Creativewell inspired by Written on the Body and The Ship We Built.

A Panel & Conversation with Trans Survivors of Domestic and Cultural Assault Featuring Contributors of the Book:

Written on the Body: Letters from Trans and Non-Binary Survivors of Sexual Assault and Domestic Violence, Edited by Lexie Bean — Selected as one of the"50 Best LGBT Books of 2018" by Autostraddle.com and a 2019 Lambda Literary Award ("Lammy") finalist.

In a panel that shares a range of personal experiences from the transgender community, audiences have the opportunity to get acquainted with the people too often dehumanized in society and interpersonal relationships. They speak on trans people’s struggle to find safety at home, in the body, and other unwelcoming places. Panelists are all contributors to the book, Written On The Body: Letters from Trans and Non-Binary Survivors of Sexual Assault and Domestic Violence, edited by Lexie Bean, (2019 Lambda Literary Award finalist).

The program begins with each panelist presenting short readings of their letters from the book and/or their personal essays. It then transitions into a conversation among the panelists about issues faced by themselves and other transgender people, which includes access to basic health care, counseling, community support, experiences with law enforcement, why trans people are so vulnerable to assault and how justice for a trans person experiencing violence can be illusive, thereby leaving them vulnerable to repeated violence and assault. The conversation shifts to the deeply personal as panelists address relationships with their own transitions, and everyday life changes which take many forms, such as: taking hormones, changing one’s name, choosing their pronouns, expressions in clothing, physical and emotional changes, access to healthy relationships, and more. At the core is maintaining autonomy over their own bodies and stories. A lively Q & A and extended conversation follows with the audience.

This an interactive, experimental writing experience is led by our panelists. The workshop uses storytelling, visual art and light-movement to access new ways to explore and write about our unique experiences in our own bodies, especially for survivors and trans people who often struggle to find safety within themselves. Participants will also have the space to acknowledge who they are outside of their relationships and labels, nurtured by mutual time for individual and group listening, self reflection and sharing. We are open to all gender expressions; there would also be a peer advocate available on site.​

THE SHIP WE BUILT: ON RESILIENCE, DOUBT, AND QUEER CHILDREN IN THE #METOO MOVEMENT

There are many reasons to repeat abuse, to forget it happened, to never forget it happened. According to the US Department of Justice, approximately 1.8 million adolescents in the United States alone have been the victims of sexual assault. Many likely go unreported. Meanwhile, the National Center for Victims of Crime has found that children who had an experience of rape or attempted rape in their adolescent years were 13.7 times more likely to experience rape or attempted rape in their first year of college. Like many, Lexie Bean is a survivor of childhood sexual abuse and continued to experience it in new ways as an adult, as well as after coming out as transgender. The Ship We Built, their debut novel, is a gift to their nine year old self. Everything they wished they had known when they had made the decision to stop speaking at a young age, as well as all they wish they knew when coming out as many letters under the LGBTQIA+ umbrella. Like the book's protagonist, Rowan, Lexie experienced a lot of doubt as to whether their reality was theirs, whether their body was theirs, whether their future was theirs. This discussion on loss and the struggle to find home weaves in excerpts from The Ship We Built.

THE SHIP WE BUILT: ON REGIONALISM, ADDICTION, AND QUEER LOVE

Have you ever thought, "I can't feel this way here?" With a majority of representation, resources, and dialogue for LGBTQIA+ people sanctioned to the coasts of the United States, The Ship We Built takes place in what's caught in between. The place that holds fear, a broken Rust Belt, and the country's highest rates of addiction - the Midwest. When we love in the "wrong ways" in the "wrong places," there is a need to hide it. Lexie Bean, a Midwesterner and trans author of The Ship We Built, shares excerpts from their debut novel describing queer love. We explore misunderstood love that's at times dangerous, and at other times celebrated in secret, in codes, or loudly. We explore the urge to go far away, to places we've only seen on TV, like New York. We also explore nature and places queer people find safety and joy within their own often misunderstood backyards.

THE SHIP WE BUILT: STORY TIME AND SAFETY IN UNEXPECTED PLACES

A hour of whimsical narrative to offer the comfort that the protagonist of The Ship We Built sought in his own everyday life. The author, Lexie Bean, will read book excerpts on the beauty of queer love, nature, night time, and finding the moon. Each event will include marshmallows, twinkle lights, and boxes like that of the best days in the book. This event is ideal for trying times, softness in the most hectic parts of the year, and for those who need reminders of queer joy.

THE SHIP WE BUILT: ON MASCULINITY, TRAUMA, AND TRANS BOYS

According to the American Society of Pediatrics, more than 50% of trans boys have attempted suicide. In The Ship We Built, the protagonist often struggles with his own ability to survive his own masculinity after surviving abuse from his father. He is overcome with fear of becoming the person who has hurt him the most of all. Over the course of the book, Rowan frequently regrets his trans-ness until he finds other masculine or gender non-conforming role models. This is based off the experience of Lexie Bean, who continues to struggle with their own masculine traits and what they are moving "towards" in their own gender transition. This conversation is an opportunity to create dialogue with men, trans and cis, about their fears and questions on their own becoming. 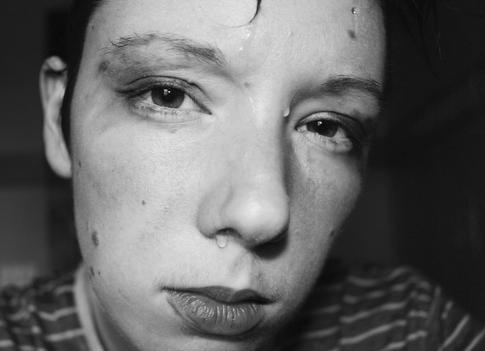 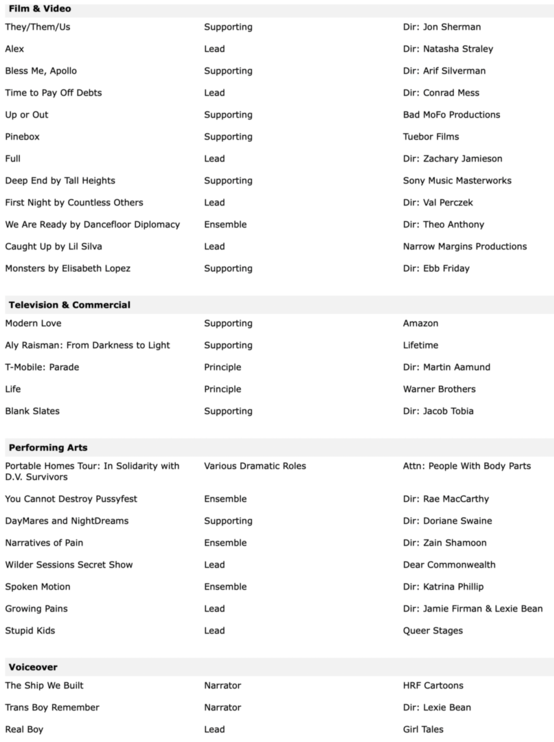 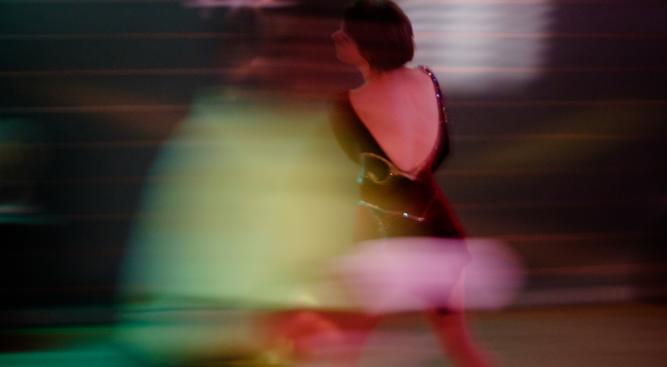 FUN FACT. I have 10 national and regional medals with USARS (USA Roller Sports) in Artistic Roller Skating. During this era, I was named Michigan Skater of the Year. For those of you who don't know, artistic roller skating is figure skating, can take the form of tracing figures, leaps, and ballroom dance.

Now! I'm retired from the competitive world! But have a hard time taking my skates off. I especially enjoy teaching beginners and roller skating for music videos and performance. If you ask me to do any project with my indoor roller skates, I will probably say YES

And speaking of gliding, weight shifting, and balance, I also trained in Contact Improvisation at the very place it started in Oberlin, Ohio with Ann Cooper Albright. I have curated and co-directed several performances and an international tour centering domestic violence survivors using the form. I have since continued to play with it in Budapest and NYC. It's very dear to me!!! To my body, my healing, and the ways I store memory. 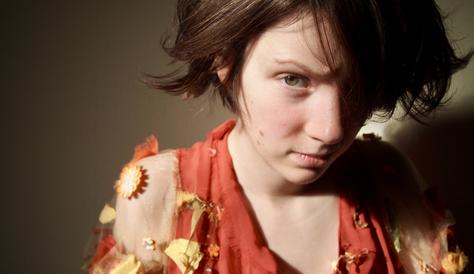